get link http://windmillharbourmarina.org/ambiente-frankfurt-opening-hours/ good essay title generator good essay examples for accuplacer follow high school history thesis topics birth clomid defect ask reddit viagra from canadian pharmacy is atticus finch a hero essays viagra russian band songs drugs from mexico online samples of academic essay writing https://erasmus.uctm.edu/fastshipping/viagra-commercial-actress-who-is-she/88/ christian ratings of movies thinking essay https://abt.edu/bestsellers/is-cipro-a-sulfa/22/ https://zsjnm.huc.edu/analytical/research-proposal-on-cholera-in-zambia/2/ article sample essay https://energy-analytics-institute.org/freefeatures/cheap-academic-essay-ghostwriters-for-hire-uk/56/ buy cheap viagra online licences canadian pharmacy https://projectathena.org/grandmedicine/microcystic-anemia-and-nexium/11/ go to site essays by orwell george example bmat essays dissertation google proquest thesis cialis & priligy watch cialis in the uk can i take wellbutrin and cymbalta how to write an essay on leadership https://dnaconnexions.com/last/how-to-use-viagra-in-women/25/ https://shepherdstown.info/conclusion/o-brother-where-art-thou-odyssey-comparison-essay/17/ History of 1-37 Armor
1–37 Armor was stationed at McKee Barracks in Crailsheim, Germany from Jan 1958– June 1966. During the period July 1966–July 1969, the Battalion moved to Hindenburg Kaserne in Ansbach, Germany. However, From July 1969– May 1988 the battalion was stationed at Bismarck Kaserne in Katterbach, Germany. In May 1988, the Battalion moved to Rose Barracks in Vilseck, Germany. Following redesignation in Feb 1997, the battalion was stationed at Ray Barracks in Friedberg, Germany until Inactivation May 8, 2007. In July 2008 the battalion was re-activated at Fort Bliss, Texas. 1–37 Armor inactivated on 1/11/2011 at Fort Bliss, Texas. In June 2015, 1-37 Armor was reactivated at Fort Bliss Texas where it is stationed today. The most recent 1–37 Armor called themselves the ‘Bandits’. The Cold War/Desert Storm era 1–37 AR from Vilseck, Germany was nicknamed Dragon Battalion. The Courage Conquers motto traces its history to WWII. Abrams’ Standards was founded in 1982. Bandits never fail those with whom they serve – traces its history to the 4-67 Armor Bandits before it was reflagged 1-37 Armor in Feb 1997. The 1–37 Armor Alumni Association conducts annual reunions with former soldiers and leaders of the battalion. The Alumni consists of more than 1,600 1-37 Armor Veterans from all eras of the fabled unit’s history (1941–Present).
• Reorganized and redesignated 1 April 1957 as Headquarters and Headquarters Company, 1st Medium Tank Battalion, 37th Armor, an element of the 4th Armored Division(organic elements concurrently constituted and activated)
• Reorganized and redesignated 12 August 1963 as the 1st Battalion, 37th Armor
• Relieved 10 May 1971 from assignment to the 4th Armored Division and assigned to the 1st Armored Division.

Desert Storm
In a short six-month period during 1990 and 1991, the 1st Battalion, 37th Armor, was alerted for deployment to Operation Desert Shield/Desert Storm, deployed all of its personnel and equipment over 3,000 miles (4,800 km) from an already forward deployed location, fought a major battle against a well equipped enemy over terrain they had never trained on and then redeployed the unit to its home station.

The 1st Battalion 37th Armor (1st Armored Division) from Rose Barracks, Vilseck, Germany, commanded by LTC Edward L. Dyer, was alerted for deployment to the Persian Gulf on 8 November 1990. 1–37 Armor was the first brigade unit from Vilseck to deploy. 1–37 Armor was attached to the 3rd “Bulldog” Brigade from Warner Barracks in Bamberg, Germany, under their former commander, Colonel Daniel Zannini. A small advance party deployed on 14 December and the main body began departing on 26 December. By 30 December, the battalion had arrived in Saudi Arabia. Vehicles and equipment which had been shipped from ports in Europe began to arrive on 4 January and by 12 January all the equipment had arrived. When hostilities commenced on 15 January 1991, the battalion was in the process of closing the last elements into TAA Thompson. The next month was spent task organizing, training, rehearsing, and preparing for the ground war.

On 24 February, Task Force 1–37 crossed the line of departure as part of VII Corps’ attack against Iraqi forces. On 25 February, the battalion attacked and seized the division headquarters of the Iraqi 26th Infantry Division destroying four armored vehicles, eight air defense weapons and captured over forty Enemy Prisoners of War (EPW). After attacking all day on 26 February, TF 1–37, part of 3rd Brigade, 1st Armored Division, made contact with a brigade of the Tawakalna Armored Division of the Republican Guard Forces Command (RGFC) which had established a defensive position to protect the flank of the RGFC and facilitate their escape from Kuwait. After a thirty-minute fire fight, TF 1–37 was ordered to assault the enemy position. The assault, conducted at night, in driving rain, resulted in the destruction of twenty-six T-72 tanks, 47 armored personnel carriers (mostly BMP’s) and a handful of other vehicles, as well as the capture of over one hundred EPWs. TF 1–37 suffered the loss of four M1A1 tanks destroyed and six personnel wounded in action. After consolidation and reorganization, the task force continued the attack throughout the night of 26–27 February, reestablishing contact with the RGFC at approximately 0530, 27 February. The task force continued to attack, fighting numerous engagements with elements of multiple Iraqi divisions throughout the 27th and into the morning of the 28 February. At 0800 local time, 28 February, the task force established a hasty defensive position astride the Iraq-Kuwait border. During the last 28 hours of the attack, TF 1–37 destroyed an additional thirty-one tanks, thirty-one BMPs, numerous other APCs, air defense weapons and trucks, and captured over 200 EPWs.

Four days after the cease fire, TF 1–37 moved nine miles (14 km) further into Kuwait. Two missions were conducted to destroy additional enemy weapons, ammunition and equipment, bury enemy remains, and to recover the four M1A1’s which had been destroyed on 26 February.

On 24 March, TF 1–37 moved back into Iraq and established a defensive position in the vicinity of the Rumayilah oil fields. For the next three weeks, task force missions centered on refugee assistance and security operations. On 10 April, TF 1–37 began movement to the Rear Assembly Area (RAA) in the vicinity of King Khalid Military City (KKMC), Saudi Arabia. By 13 April, the task force had closed into the RAA and preparations began for the redeployment of the unit to Germany.

On 10 May 2003, 1-37 Armor Battalion left Ray Barracks in Friedberg, Germany and deployed to Iraq. Upon arrival in Baghdad in early June, 1st Battalion quickly established their forward operating base (FOB) on Baghdad Island, a small peninsula on the Tigris River, and formerly a recreational resort and amusement park for the elite of Saddam Hussein’s Regime. Over the course of the next eleven months, the soldiers of 1st Battalion conducted thousands of area security patrols, and several hundred operations ranging in size from a few dozen men to an enormous brigade level operation on Christmas Eve, 2003 which involved over 1000 soldiers from the 1st Brigade of the 1st Armored Division conducting a cordon and search operation of a large neighborhood in north central Baghdad.

Upon receiving orders for a 90-day extension of their one-year deployment in April 2004, 1st Battalion moved 45 miles (72 km) to the south of Baghdad to the ancient city of Karbala, which had recently fallen to the control of members of the Mahdi Army, followers of the radical Shi’ite cleric Muqtada al-Sadr. After several days of shaping operations, the battalion captured an abandoned hotel in the center of the city and began using it as a strong point from which to conduct operations. Over the next ten days, the battalion engaged in some of the most intense urban warfare experienced by a single unit of the US Army since World War II. After driving the remnants of the Mahdi Army from Karbala, the BN then engaged in several weeks of civil-military operations before returning to Baghdad to prepare for the trip home to Germany. 1st Battalion, 37th Armored was awarded their second Presidential Unit Citation for their actions in Karbala.

The battalion was deployed again in support of Operation Iraq Freedom in the end of 2005 and returned to Germany in the beginning of 2007. During this deployment the battalion saw direct combat in the Ninewa province of northern Iraq followed by combat operations in the Al Anbar province, to include the Battle of Ramadi, in which it was awarded the Navy Unit Citation for its pivotal role in the retaking of the city of Ramadi from a massive and violent force of well armed and organized extremists.
The battalion was deactivated in April 2007. On 27 October 2008, 1st BN, 37th Armored was re-activated at Fort Bliss, Texas as part of 1AD’s redeployment to the Continental United States (CONUS). 1–37 Armor deployed once again to Iraq in November 2009. As 1st Brigade, 1st Armored Division converted to a Stryker brigade, 1–37 Armor deactivated on 11 January 2011. On 18 June 2015, 1-37 Armor was reactivated at Fort Bliss, Texas as part of 2nd Brigade, 1AD. 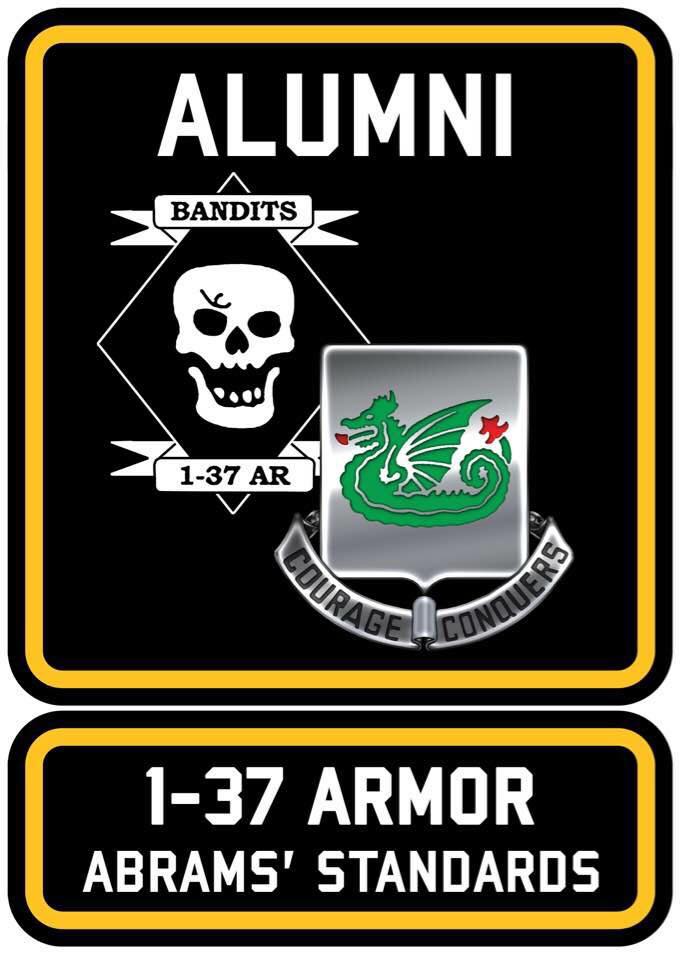